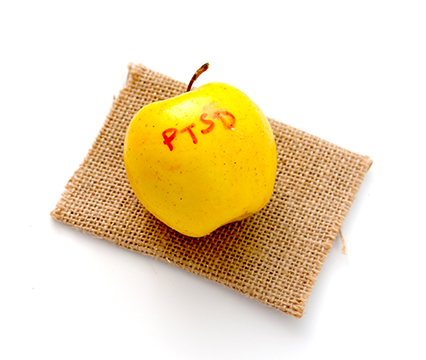 The CNP Diet, Trauma, and PTSD Research Category consolidates research exploring the interdependent relationship between dietary intake, trauma, and PTSD. To view each original study on the open internet, click “Original.” To view the CNP summary of the study, click “CNP Summary.” While a small portion of the studies in this research category is available below for free, the full set of studies (and their summaries) are available to CNP members through the CNP Library Membership (available Fall 2021).

Braun et al. (2019) set out to discover if there is a correlation between trauma exposure type, and number and type of DSM-5 posttraumatic stress disorder (PTSD) symptoms, with the number of binge eating symptoms. The data used was from the National Epidemiologic Survey on Alcohol and Related Conditions-III (NESARC-III: 2012-2013), which surveyed a nationally representative sample of 36,309 non-institutionalized US civilians aged 18 years and older. Trauma exposure, PTSD, and binge eating symptoms were assessed using the Alcohol Use Disorder and Associated Disabilities Interview Schedule, DSM-5 Version (AUDADIS-5), which allowed the following groups to be identified: trauma-exposed individuals with no/low PTSD symptoms, those with subthreshold PTSD, and those with threshold PTSD. The results demonstrated that those individuals with subthreshold and threshold PTSD were more likely to exhibit a greater number of binge eating symptoms than trauma-exposed individuals with no/low PTSD symptoms. Negative conditions and mood symptoms in particular were associated with an increase in binge eating symptoms. When considering the type of trauma exposure, combat-related trauma was linked with fewer symptoms of binge eating among men, while more signs were seen in women who had experienced child mistreatment. This study highlights the fact that binge eating may be used as a strategy to alleviate distressing symptoms of PTSD. [NPID: PTSD, trauma, binge eating, eating disorders, alcohol, child abuse]

Since people with posttraumatic stress disorder (PTSD) are at increased risk of various chronic diseases, Kim et al. (2019) tested the theory that the poor health outcomes were linked to diet quality by evaluating PTSD and deterioration in diet quality over time among the 51,965 women who participated in the Nurses' Health Study II PTSD sub-study. In this study, diet was assessed at 4-year intervals via the Alternative Healthy Eating Index-2010 (AHEI). A total of 7 comparison groups for trauma/PTSD status were determined using information from the Brief Trauma Questionnaire and Short Screening Scale for DSM-IV PTSD [no trauma exposure, prevalent exposure (trauma/PTSD onset before study entry), or new-onset (trauma/PTSD onset during follow-up)] and also additional categories were created, for example women with prevalent exposure as having trauma with no PTSD symptoms, trauma with low PTSD symptoms, and trauma with high PTSD symptoms. Regardless of PTSD status, diet quality did improve over time, although women with prevalent high PTSD and women with new-onset high PTSD symptoms had 3.3% and 3.6% lower improvement in diet quality, respectively, compared to those with no trauma. These trends remained consistent after adjusting for health conditions, sociodemographics, and behavioral characteristics. These findings suggest PTSD is associated with less healthy changes in overall diet quality over time, and could implicate poor diet quality is involved in the higher occurrences of chronic diseases linked with PTSD. [NPID: PTSD, trauma, chronic disease, diet quality]

The role of nutrients in protecting mitochondrial function and neurotransmitter signaling: implications for the treatment of depression, PTSD, and suicidal behaviors

Critical reviews in food science and nutrition, 56(15), 2560–2578. This 2016 review explains how various nutrients can protect mitochondria and lipids in the neuronal circuits associated with cognitive and affective behaviors from oxidation, and how these nutrients like ω3 fatty acids, vitamin B12, folic acid, vitamin C, zinc, and magnesium can possibly enhance neurocognitive function and also have a positive influence on depression and suicidal behaviors. There is also evidence to suggest the regular consumption of these nutrients may help prevent the onset of mood disorders and suicidal behaviors in vulnerable people, or even add to the therapeutic effect of the current and available antidepressants. Since preclinical rodent studies have indicated that chronic stress and the stress hormone cortisol may cause oxidative damage to mitochondrial function and membrane lipids in the brain, the various findings presented in this review could have important implications for the health of both military and civilian populations. [NPID: PTSD, trauma, mitochondria, lipids, neuronal circuits, cognition, affect, behavior, fatty acids, vitamin B12, B12, folic acid, vitamin C, zinc, magnesium, neurocognitive function, suicide, oxidative stress, military]

Association between posttraumatic stress disorder and lack of exercise, poor diet, obesity, and co-occurring smoking: A systematic review and meta-analysis

Van den Berk-Clark et al. (2018) performed a systematic review and meta-analysis to investigate whether PTSD is associated with behavioral risk factors for cardiometabolic disease (CMD) such as diet, exercise, smoking and obesity. A total of 1,349 studies were identified from the systematic search of several databases (PubMed, Web of Science, and Scopus) and 29 studies met all eligibility criteria. Meta-analysis revealed that PTSD sufferers were 5% less likely to have healthy diets, 9% less likely to engage in physical activity, 31% more likely to be obese, and about 22% more likely to be current smokers, compared to those without PTSD. The increased risk of CMD development (such as cardiovascular disease and diabetes) linked with PTSD may be partly due to poor diet, sedentary lifestyle, high prevalence of obesity, and co-occurring smoking. The findings of this meta-analysis suggest PTSD’s association with CMD is partly due to poor health behaviors observed in this patient population. [NPID: PTSD, trauma, behavior, cardiometabolic disease, smoking, exercise, obesity, diabetes, sedentary lifestyle]

The purpose of this 2015 study was to investigate the possible associations between DSM-5 PTSD, gender and impaired eating habits among 512 Italian earthquake survivors. DSM-5 PTSD was analyzed using the Trauma and Loss Spectrum-Self Report (TALS-SR), while the Mood Spectrum-Self Report (MOODS-SR) assessed alterations in eating behaviors mainly by asking 4 questions/items: “there was no food that appealed to you or tasted good to you?”; “you constantly craved sweets or carbohydrates?”; “your appetite or weight decreased?”; and “your appetite or weight increased?”. Among the participants with no PTSD, females were significantly more likely to confirm at least one MOODS-SR eating behavior item (MOODS-SR EB) than males. Among all individuals with no PTSD, at least 1 MOODS-SR EB correlated with a significantly higher mean TALS-SR symptomatological domains total score, relative to those without MOODS-SR EB. This study concludes that there was a significant association between MOODS-SR EB and PTSD symptoms among the L׳Aquila earthquake survivors with no PTSD. [NPID: PTSD, trauma, gender, Italy, earthquake, craving, sweets, carbs, carbohydrates, appetite]

This 2013 study experimented on rats to evaluate how omega-3 fatty acids during brain maturation can influence challenges incurred during adulthood and predispose the brain to a PTSD-like pathobiology. During the brain maturation period of the rats, they were fed a diet either enriched or deficient in omega-3 fatty acids (n-3), before switching to a Western diet (WD) at adulthood. Following this, the rats were subjected to mild traumatic brain injury (mTBI), which led to an increase in anxiety-like behavior and in NPY1R (a hallmark of posttraumatic stress disorder). The more pronounced effects were seen in those given a n-3 deficient diet before transitioning to a WD. The WD or mTBI affected brain IL1β levels and peripheral Th17 and Treg subsets only in animals previously conditioned to the n-3 deficient diet, implying that the lack of n-3 in the initial diet primed the rats’ immune system to the challenges imposed by the WD and brain trauma. These results provide novel evidence for the capacity of maladaptive dietary habits to lower the threshold for neurological disorders in response to challenges. [NPID: PTSD, trauma, omega-3s, fatty acids, Western-style diet, WS diet, anxiety, immune system, immunity, brain trauma, neurological disorders]

Early life adversity and/or posttraumatic stress disorder severity are associated with poor diet quality, including consumption of trans fatty acids, and fewer hours of resting or sleeping in a US middle-aged population: A cross-sectional and prospective study

While early life adversity (ELA) and post-traumatic stress disorder (PTSD) are associated with poorer psychological and physical health, the purpose of this 2015 study was to investigate whether ELA and/or PTSD are related with nutrition, physical activity, resting and sleeping and smoking. Firstly, a sample of 151 adults (age: 45.6±3.5 y, BMI: 30.0±7.1kg/m2) underwent anthropometric measurements, as well as detailed questionnaires for dietary assessment, physical activity, resting and sleeping, smoking habits and psychosocial assessments. These outcomes were assessed again in 49 participants during the prospective follow-up visit 2.5 years later. Compared to those individuals with no/lower ELA or PTSD severity, those with more severe ELA/PTSD consumed diets poorer in quality and consumed larger quantities of trans fatty acids - although these differences were significantly attenuated null after adjusting mainly for education or income and/or race. Less hours of resting and sleeping was reported in the subjects deemed to have higher ELA severity, relative to those with less severe ELA. When ELA and PTSD were combined, an additive effect was observed on resting and sleeping (p=0.001), and both these results remained significant in the fully adjusted model. There was also evidence of greater energy intake from trans fatty acids, increased incidence of smoking more, and lower physical activity among those with higher ELA or PTSD severity. Similar trends were observed in the prospective data, although statistical significance of results was lower due to the lower number of participants. To summarize the findings, fewer hours of resting and sleeping as well as poorer diet quality were linked to ELA and/or PTSD, suggesting the underlying pathway in which metabolic abnormalities arise in people with ELA and/or PTSD. Furthermore, variation in diet quality is significantly attenuated by race and/or education and/or income, whereas differences in other lifestyle habits of individuals with and without ELA and/or PTSD, such as physical activity, are mostly explained by confounding sociodemographic variables and/or body mass index. [NPID: PTSD, trauma, ELA, early life adversity, sleep, smoking, smokers, trans fat, education, income, race, diet quality]

The aim of this 2016 article was to discover whether exercise and diet moderate the association between the number of potentially traumatic life events experienced and posttraumatic stress, depression, and relationship quality, using data gathered from 321 adult individuals. A positive and direct correlation was found between exercise with higher posttraumatic symptoms and depressive symptoms. Moreover, a healthier diet was directly related with lower posttraumatic stress, fewer depressive symptoms, and higher relationship quality. These findings implied there may be value in highlighting exercise and diet in family therapy. [NPID: PTSD, trauma, depression, exercise, family therapy]

Post-traumatic stress disorder (PTSD) in mid-age and older adults differs by immigrant status and ethnicity, nutrition, and other determinants of health in the Canadian Longitudinal Study on Aging (CLSA)

Post-traumatic stress disorder (PTSD) in mid-age and older adults differs by immigrant status and ethnicity, nutrition, and other determinants of health in the Canadian Longitudinal Study on Aging (CLSA)

The Gut Microbiome and Mental Health: Implications for Anxiety- and Trauma-Related Disorders

The Gut Microbiome and Mental Health: Implications for Anxiety- and Trauma-Related Disorders