Blue Zones and Their Role in the Diet-Mental Health Relationship (DMHR): A Three Part Series Exploring the Interplay of Diet, Longevity, and Mental Health. 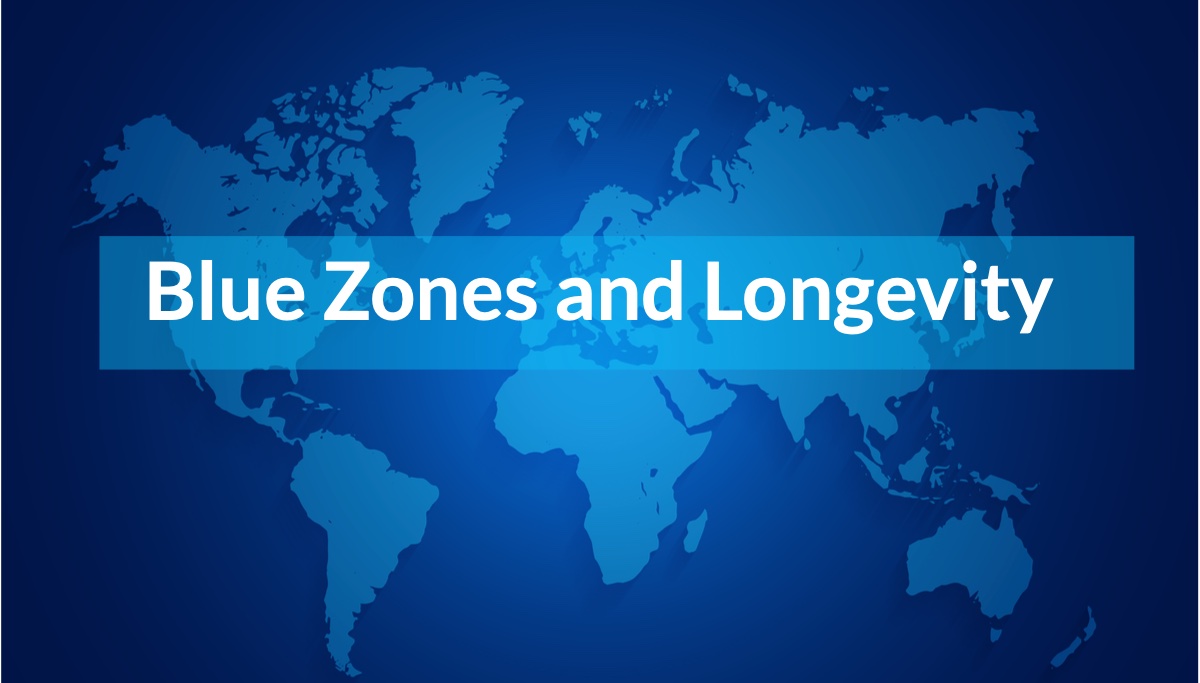 Editor’s Note: This article, the second in this three-part series, dives deeper into the dietary habits of Blue Zone regions and highlights the physiological impact of nutrition on aging bodies. The next and final article will explore the interplay of diet and mental health in the context of abnormally aging populations.

As introduced in What is a Blue Zone, Blue Zones are geographic territories that produce abnormal numbers of centenarians: their residents are ten times more likely to reach age 100 than the average US citizen (Buettner & Skemp, 2016). These five regions — Ikaria, Greece; Okinawa, Japan; Sardinia, Italy; Loma Linda, California; and Nicoya, Costa Rica — encompass nine shared lifestyle characteristics that help explain exceptional longevity. These are called the Power 9 (Buettner & Skemp, 2016), and were reviewed in the previous article.

Blue Zone residents are ten times more likely to reach age 100 than the average US citizen.

Of these nine characteristics, food is involved in three — the 80% rule, plant slant, and wine at 5 — two of which speak to the actual dietary composition of Blue Zone meals. Evidence supports a correlation between healthy dietary patterns and a decreased risk of early death, begging the further inspection of diet as a factor in the atypical longevity of Blue Zone residents (Harmon et al., 2015). 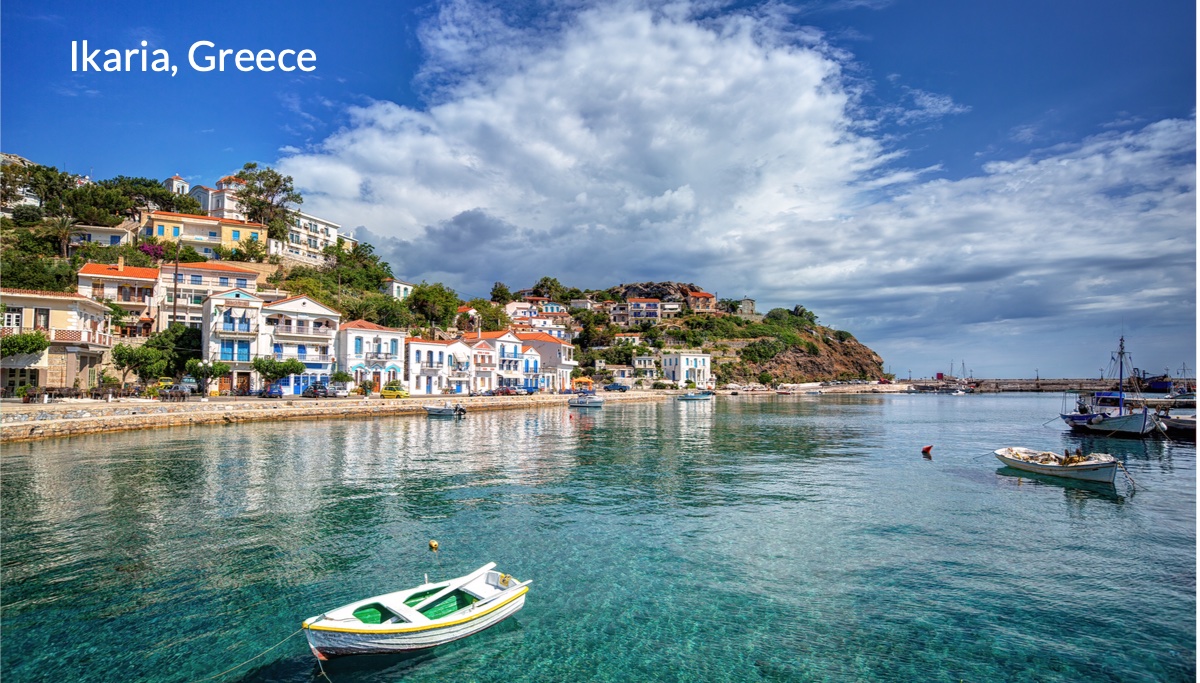 The traditional village of Evdilos, in Ikaria island, Greece. Courtesy of Shutterstock Images.

Green vegetables and wild plants cooked in olive oil act as main meals rather than side dishes.

Given their Mediterranean-inspired dietary habits, the high life expectancy of Ikarian individuals is not shocking. Adherence to a Mediterranean diet has been significantly associated with a reduced risk of mortality: 9% from cardiovascular disease, 6% from cancer, and 13% from Parkinson’s disease and Alzheimer’s disease (Sofi et al., 2008). Additionally, in an Ikarian-focused study, long-term fish consumption was independently associated with the improved kidney function of elders (Chrysohoou et al., 2013).

By growing much of their own diet, Ikarian individuals have been able to keep up with traditional Mediterranean eating habits into the 21st century, which may play a central role in their longevity (Legrand et al., 2021). 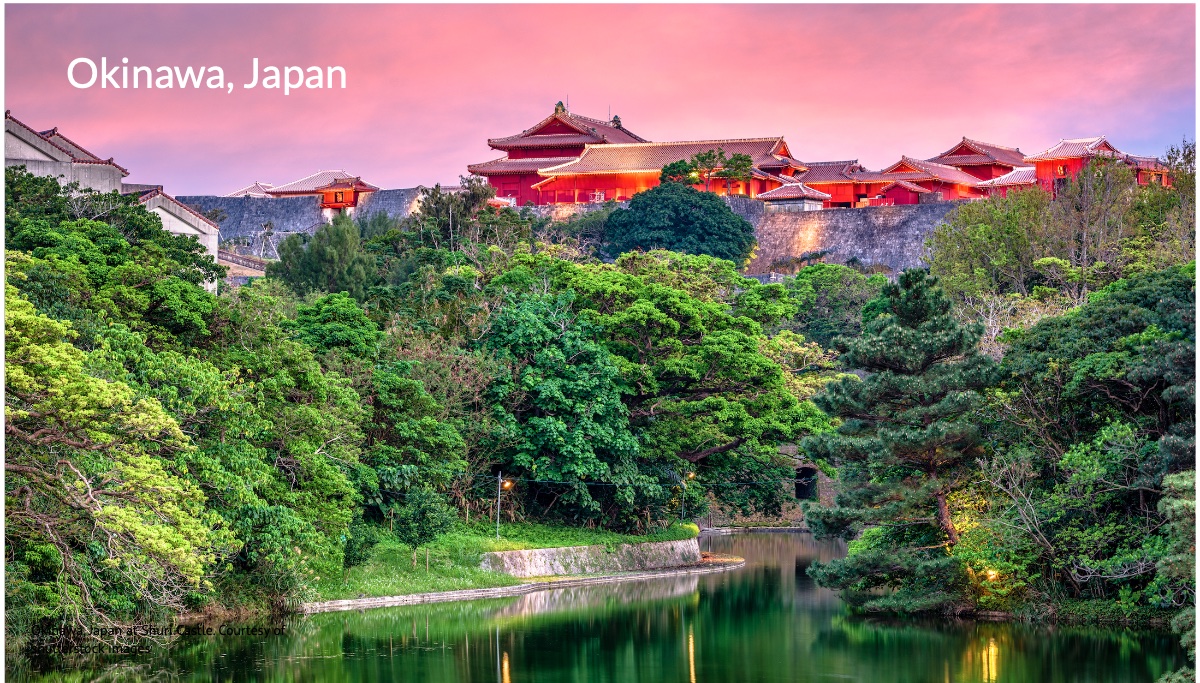 The high phytonutrient nature of the Okinawan diet may play a protective role in longevity, as antioxidants have the ability to buffer against oxidative stress: a set of chain reactions that impact the development of diseases such as arthritis, diabetes, dementia, and cancer (Tan et al., 2018; Willcox et al., 2013). The diet’s low glycemic load and low saturated fat content further reduce the known effects of oxidative stress (i.e., cardiovascular disease and other chronic illnesses), potentially aiding in the extension of Okinawan lifespans (Willcox et al., 2013). 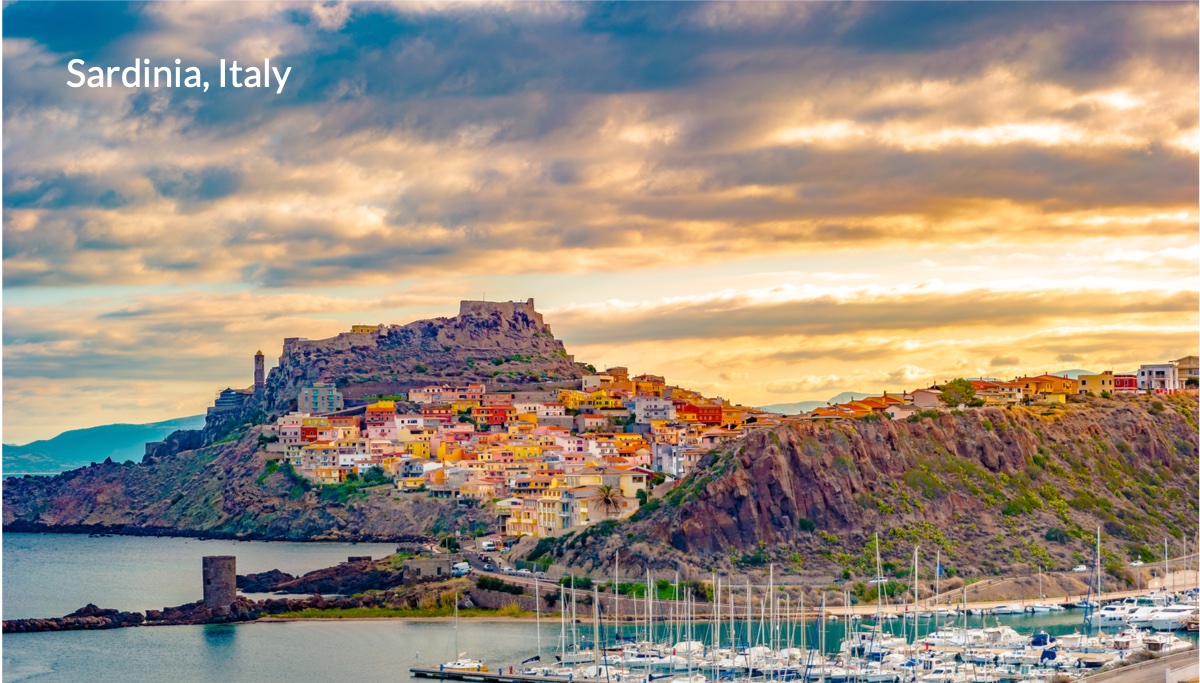 The classic Sardinian diet is considered a variant of the Mediterranean diet, as it stresses the consumption of carbohydrate foods and olive oil. However, it differs in its emphasis on meat (Pes et al., 2022). Sardinian dietary patterns, influenced by the city’s history of animal husbandry, involve the high consumption of animal products such as cheese, pork fat, and poultry meat (Pes et al., 2022). As sheep and goats contributed to Sardinia’s economic stability, dairy products such as soft sour cheeses are also prevalent (Pes et al., 2021). 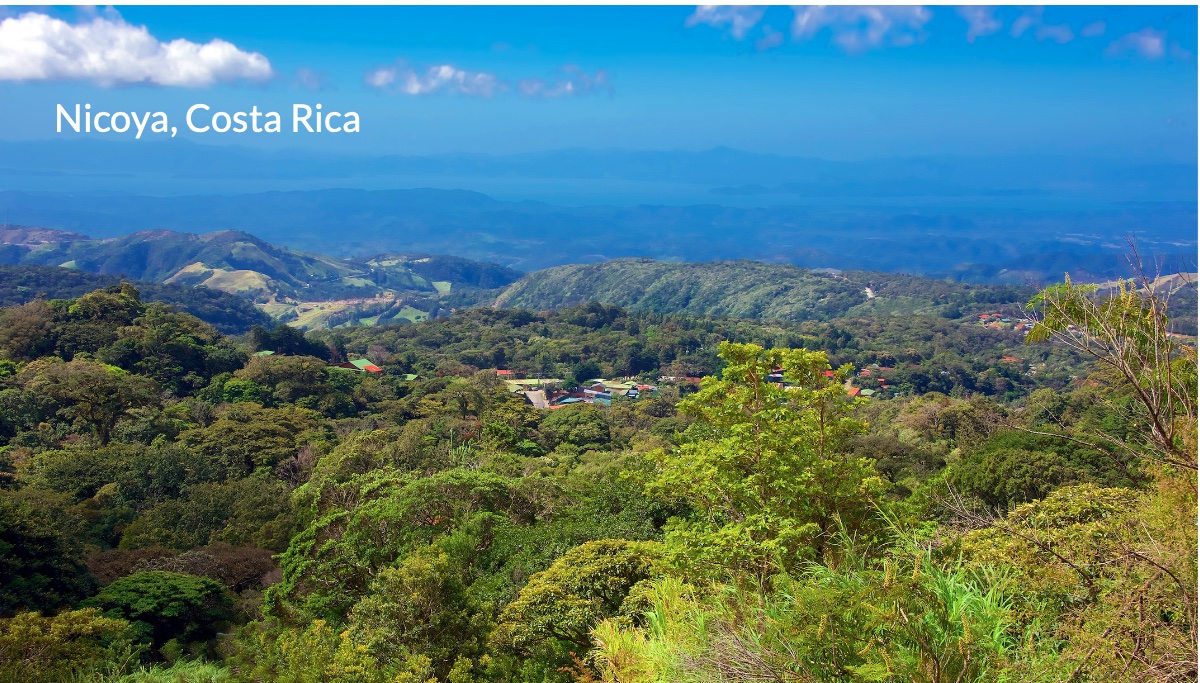 While overall the residents of Nicoya eat a plant-based diet, the consumption of animal proteins is still relatively high.

Something unique to the Nicoya diet is the high calcium and magnesium content of their drinking water (Buettner & Skemp, 2016). This not only helps protect against heart disease but also promotes strong bones, a crucial component of healthy aging (Buettner & Skemp, 2016). Also notable is their high fruit consumption — mango and papaya specifically are known to promote high levels of antioxidants (Pes et al., 2022). 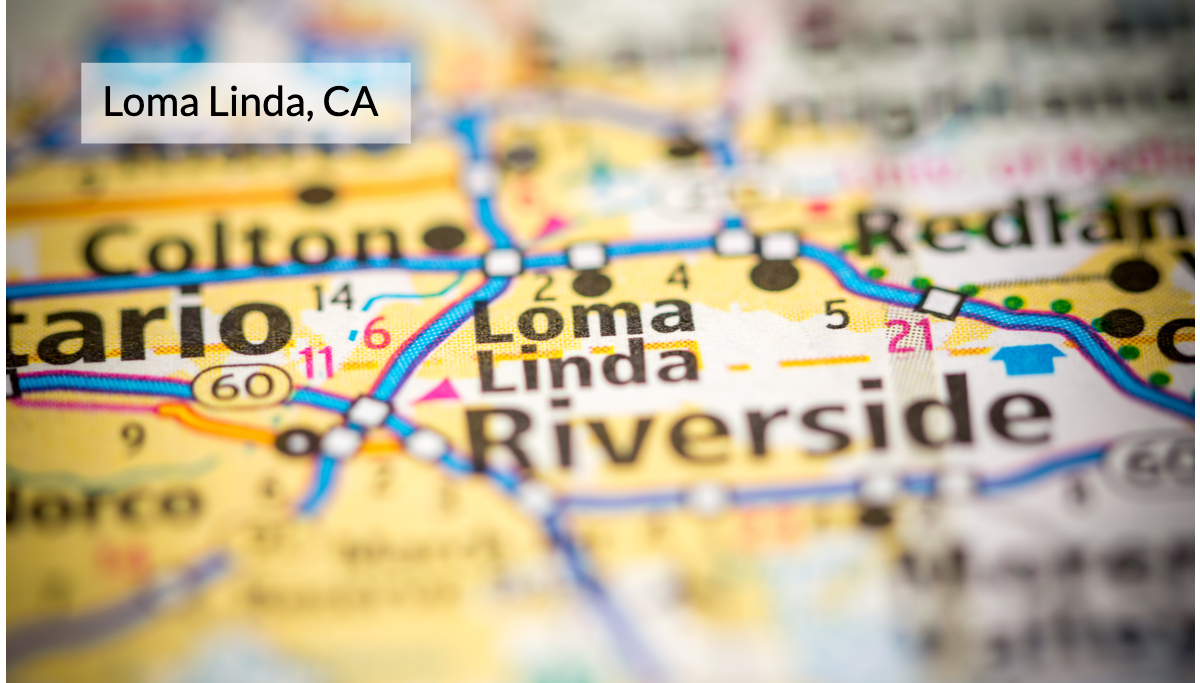 Loma Linda, California on a map. Courtesy of Shutterstock Images.

This surge in dietary fiber through the consumption of vegetables, fruits, grains, and nuts is associated with lowered blood cholesterol and may offer protection against colon and rectal cancer, potentially explaining Loma Linda Adventists’ longevity (Howe et al., 1992; Soliman, 2019). The consumption of these foods combined with reduced meat intake may also decrease the risk of diabetes mellitus, hypertension, and arthritis (Fraser, 1999), facilitating healthier aging.

It is important to note that abstinence from smoking and generally limited alcohol intake might serve as confounding variables in exploring the longevity of Adventists (Montgomery et al., 2007). In other words, diet alone may not explain the above-average longevity of Adventists, as various lifestyle factors also impact healthful aging. Nonetheless, the lifespan for California Adventists is 7.3 years longer for men and 4.4 years longer for women than the general population in California, calling for the continued exploration of how diet influences abnormal aging (Fraser & Shavlik, 2001).

What commonalities can we extract from the five independent Blue Zones? Each diet is influenced by unique religious, historical, cultural, and environmental factors, making it hard to combine them all under a single pattern (Pes et al., 2022). Nonetheless, there are a few takeaways we can make.

Each diet is influenced by unique religious, historical, cultural, and environmental factors, making it hard to combine them all under a single pattern.

First: the self-produced nature of the food consumed. Whether it be the fishermen of Ikaria catching the evening’s dinner or Okinawan elders growing yellow and green vegetables, much of the food prepared comes from local sources. This may be due to most of the Blue Zones’ more geographically isolated nature as well as financial constraints.

Second: the antioxidant-rich tendencies of the diets. Though from different sources (i.e., fruit in Nicoya, vegetation in Loma Linda, or wine in Sardinia), all the diets offer high amounts of antioxidants.

It is clear that diet impacts longevity, as foods hold the power to either protect against or increase the risk of morbidity as well as health issues such as cardiovascular diseases, cancers, and arthritis. Knowing that nutrition impacts longevity from a physiological standpoint begs the question of how it indirectly influences longevity through its connection with mental health. The diet-mental health relationship within Blue Zone territories will be explored in this series’s third and final article.

Link, R., Elliott, B. (2021). What is cassava? Health benefits and how to prepare it. Healthline. https://www.healthline.com/nutrition/tapioca#TOC_TITLE_HDR_5