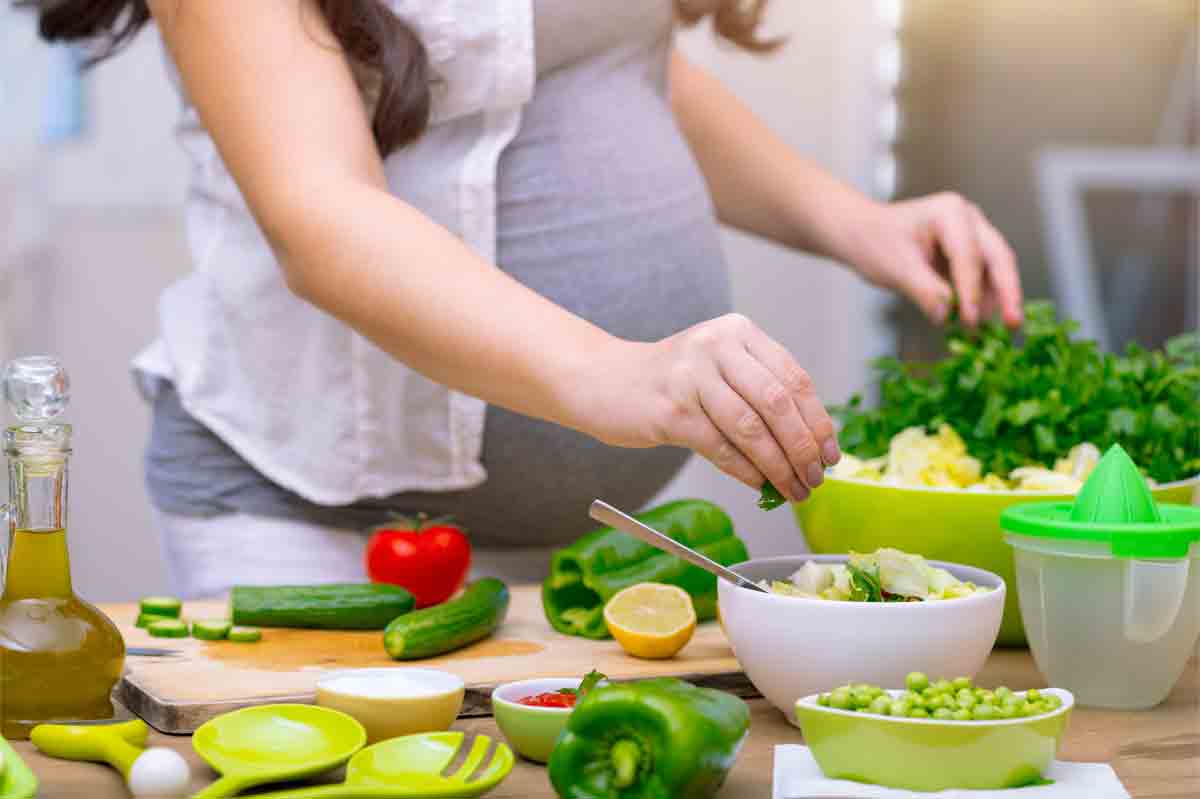 The CNP Diet and Post-Partum Mental Health Research Category consolidates research exploring the interdependent relationship between dietary intake and post-partum maternal mental health. To view each original study on the open internet, click “Original.” To view the CNP summary of the study, click “CNP Summary.” While a small portion of the studies in this research category is available below for free, the full set of studies (and their summaries) are available to CNP members through the CNP Library Membership (available Fall 2021).

Association of maternal depression with diet: A systematic review

This 2020 systematic review investigated whether the mental health of pregnant women may adversely affect their diet or the inverse: that poor nutritional intake during pregnancy may predispose women to mental health issues. Thirteen peer-reviews articles published between 2000 and 2018 evaluating the relationship between antenatal and postnatal depression with dietary intake were included in this review. Of these, five were cohort studies (including two birth studies) and eight were cross-sectional studies accumulating data from a total of 12,742 individuals. The studies were split into five groups based on what they analyzed: nutrients, micronutrients, dietary patterns, dietary behaviors, and intake of fish and vegetables. The “Healthy Eating Index” was inversely associated with maternal depression, while deficiencies in calcium, iron, and folate were all found to be associated with maternal depression. Studies exploring the association of depression with dietary patterns found a protective association of "Health Conscious", "Healthy," and "Brazilian" dietary patterns with maternal depression. In a diet behavior study, predictors of depressive symptoms in the late postpartum period (after childbirth) were found to be prenatal (before birth) and early postpartum eating attitudes and BMI. The authors conclude that lifestyle risk factors could be an important contributor to maternal depression.

In this 2015 prospective cohort study, Vilela et al. examined 207 healthy pregnant women in Brazil to determine if there is a correlation between pre-pregnancy dietary patterns and variations in anxiety symptoms from mid-pregnancy to early postpartum. The women were examined at 5-13, 20-26, and 30-36 gestational weeks, and once at 30-45 days postpartum (tests included State-Trait Anxiety Inventory to evaluate anxiety symptoms and food frequency questionnaire for dietary intake). The subject population could be divided based on their pre-pregnancy dietary patterns: common-Brazilian (mainly rice and beans); healthy (mostly fruits, vegetables, fish and tea); and processed. The mean anxiety symptom scores for the second trimester, third trimester and postpartum were 40.4, 40.5, and 37.2 respectively. When accounting for gestational age, the rate of variation of the State-Trait Anxiety Inventory score was 0.535 (95% CI -0.035 to 1.107; P=0.066). Statistically significant evidence was found negatively linking both the common-Brazilian (p=0.021) and healthy eating pattern (p=0.029) with prospective changes in anxiety. The researchers conclude that high adherence to the common-Brazilian or healthy dietary patterns was negatively associated with higher anxiety symptom scores from mid-pregnancy to early postpartum in this group of Brazilian women.

This 2020 systematic review retrieved data from existing studies (search ranging from 1835-2020) and examined the association between maternal postpartum diet and postpartum depression (PPD). Of the 931 relevant articles identified, six met the eligibility criteria, of which four were cross-sectional and two had a cohort design. All but one study found at least one inverse association, linking greater adherence to a healthy diet during the postpartum period with fewer PPD symptoms. Although the researchers state that further longitudinal and intervention studies are needed, a balanced maternal diet with a focus on fruits, vegetables, fish, grains, legumes, and herbs is suggested to possibly reduce the incidence of PPD. This review provides evidence that the postnatal diet could have an effect on postpartum depression symptoms.

Prospective associations of maternal dietary patterns and postpartum mental health in a multi-ethnic Asian cohort: The Growing up in Singapore towards Healthy Outcomes (GUSTO) study

In this 2018 study, researchers aimed to characterize dietary patterns during the “confinement period” (the first month after giving birth) and then examine their associations with postpartum depression (PPD) and anxiety (PPA). Three-day food diaries recorded dietary intakes of 490 women in the first month postpartum, and at the 3-month postpartum mark, participants completed the Edinburgh Postnatal Depression Scale (EPDS) and State-Trait Anxiety Inventory (STAI) to indicate depressive and anxiety symptoms (higher the score, the more symptoms). Four dietary patterns were identified: Traditional-Chinese-Confinement diet, Traditional-Indian-Confinement diet, Eat-Out diet, and Soup-Vegetables-Fruits diet. The Traditional-Indian-Confinement diet was associated with less PPD symptoms and showed a non-significant link with reduced probable PPD, and the Soup-Vegetables-Fruits diet was associated with fewer PPA symptoms. The findings therefore included adherence to the Traditional-Indian-confinement diet (composed of herbs and legumes) and Soup-Vegetables-Fruit diets (high in fruits, vegetables and fish) during the postpartum period were associated with fewer PPD and PPA symptoms, respectively.

This 2019 study recruited 1,659 participants from Tianjin, China. The researchers assessed the participants’ diets using food frequency questionnaire, as well as their depressive symptoms at 6-12 weeks postpartum (after giving birth) in order to investigate the association between dietary patterns and incidence of postpartum depression among Chinese women. Six dietary habits were identified among the pregnant women: beverage, vegetable, cereal-meat, nut-fruit, egg, and seafood patterns. The highest tertile (T3) of the nut-fruit pattern was significantly associated with reduced risk of postpartum depression (OR = 0.74; p = 0.02) while the T3 of the seafood eating habit was also associated with fewer incidences of postpartum depression (OR = 0.753; p = 0.033). This present study therefore found that an adequate dose of fruits, nuts, and seafood is important for postpartum women in China.

Dietary patterns during pregnancy and the risk of postpartum depression: the mother-child 'Rhea' cohort in Crete, Greece

In this 2011 study, Chatzi et al. retrieved data from the prospective mother-child cohort ‘Rhea’ study set in Crete, Greece between 2007-2010 (529 female participants). They sought to identify and describe the dietary patterns of the pregnant women and investigate whether dietary habits during pregnancy were related to postpartum depression. The Edinburgh Postpartum Depression Scale (EPDS) was used to examine depressive symptoms at 8-10 weeks postpartum. During pregnancy, the participants completed food frequency questionnaires, which were used to identify two dietary patterns: ‘health conscious’— characterized by vegetables, fruits, pulses, nuts, dairy products, fish, and olive oil — and the ‘Western’ eating pattern. High adherence to a ‘health conscious’ diet was associated with lower EPDS scores (highest vs lowest tertile; p = 0.02). Women in the second or third tertile of the ‘health conscious’ dietary pattern were about 50% less likely to exhibit a high number of PPD symptoms (EPDS ≥ 13) compared with those in the lowest tertile. Additional longitudinal studies and trials are warranted to support these findings, but the researchers conclude that a healthy diet during pregnancy is associated with a decreased risk of developing postpartum depression.

This 2014 article provides a summary of postpartum depression and other psychological morbidities that occur following childbirth. Tahirkheli et al. mainly focus on postpartum depression (PPD) since this affects 10-15% of women after giving birth. Oftentimes PPD goes unnoticed and untreated, resulting in the mother and child experiencing long-term consequences. There is a fair amount of evidence showing that mothers of infants in the neonatal intensive care unit (NICU) are more likely to suffer from postpartum depression and experience even worse symptoms than mothers of healthy infants. According to this review, there has not been sufficient attention paid to PPD in the neonatal intensive care unit, although we have seen increased awareness of its overall prevalence and the associated complications. The researchers therefore discuss promising intervention programs, potential screening measures for PPD, the role of NICU healthcare staff in addressing this issue, and future directions for research. [NPID: neonatal intensive care unit, postpartum depression, mothers]

In this 2017 study, Baskin et al. investigated the relationship between diet quality of expecting mothers before giving birth and the occurrence of depression before and after childbirth. Recently the diet during pregnancy has emerged as a possible modifiable factor that can help prevent mental disorders in the women and their offspring. The women participants of this study were assessed on their depressive symptoms twice during gestation (on average at 16.7 weeks and at 32.89 weeks), and again postpartum (13.51 weeks after childbirth on average). A food frequency questionnaire was also administered during pregnancy at the same time as the Edinburgh Postnatal Depression Scale. This revealed that an unhealthy dietary pattern (consisting of sweets, refined grains, high‐energy drinks and fast foods) was associated with greater depressive symptoms at 32 weeks gestation. Since this link was only observed at one time point, it is difficult to confidently state the predictive nature of either dietary patterns or depressive symptoms. Larger prospective studies and dietary intervention studies are required. [NPID: mothers; neonatal intensive care unit; postpartum depression]

The aim of this 2021 study was to examine the prevalence of postpartum depression and its associated risk factors among mothers with infants in the Neonatal Intensive Care Unit (NICU). According to the authors of this article, mothers of infants being looked after in the NICU are at higher risk of suffering from depression after childbirth. The risk factors of this form of depression include environmental, psychological, and biological factors. The results of this study revealed that postpartum depression was reported in around 12-68% of mothers whose infants were in NICU. Moreover, early (preterm) childbirth, being hospitalized long-term, and maternal role changes were the risk factors most likely to have contributed to postpartum depression. Furthermore, the mental health of the mother was found to be influenced by intake of food based on traditional practices. To conclude, a rational approach in addressing mental health issues, and adhering to traditional food practices may help promote good well-being and health in mothers postpartum. [NPID: childbirth, mothers, infants, postpartum, depression, childbirth depression, intensive care unit, postpregnancy food, postpartum food, postpregnancy diet, postpartum diet]

Nutritional deficiencies and maternal depression: associations and interventions in lower and middle-income countries: a systematic review of literature

Nutritional deficiencies and maternal depression: associations and interventions in lower and middle-income countries: a systematic review of literature