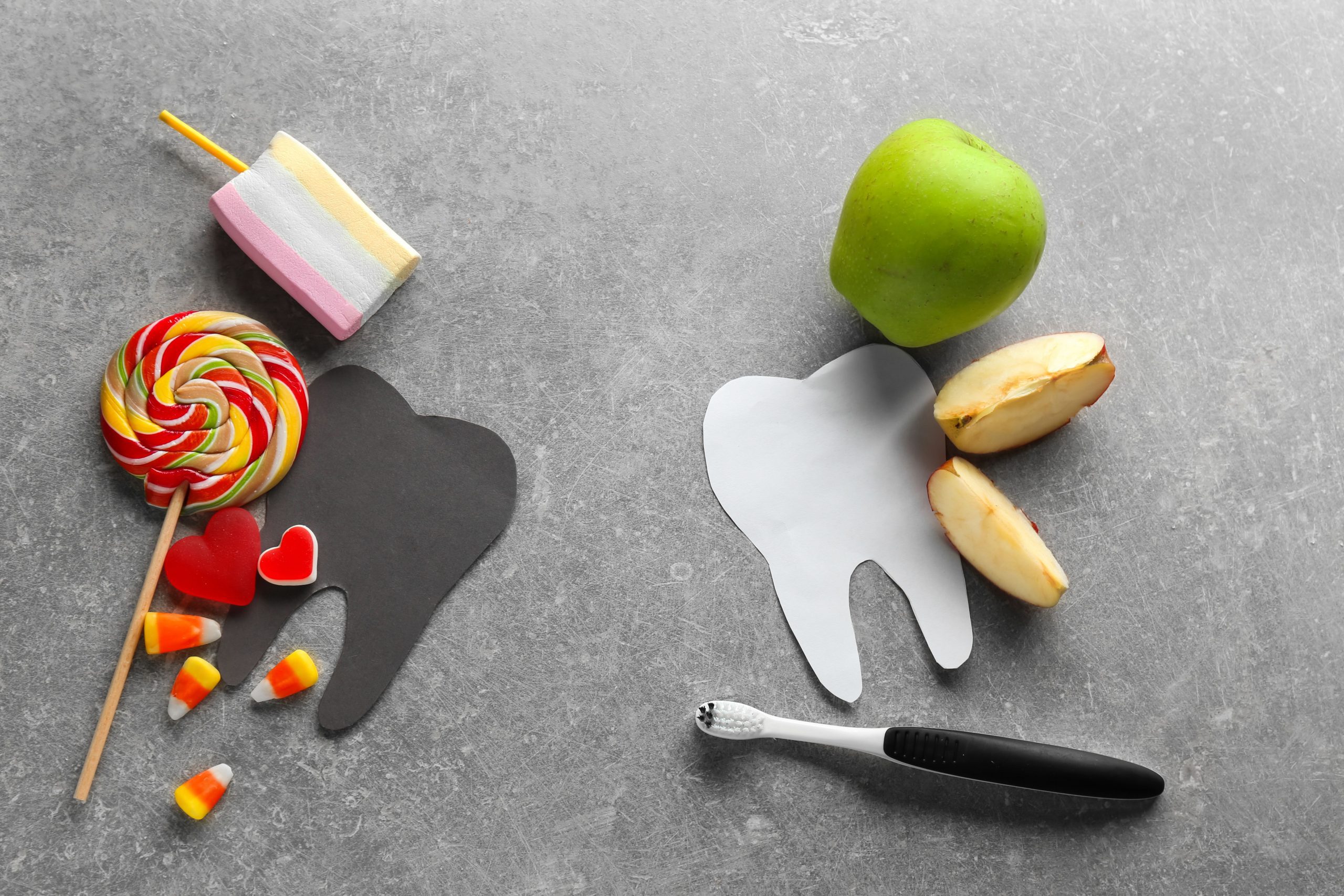 Sugars and dental caries: evidence for setting a recommended threshold for intake

Moynihan (2016) emphasizes the prevalence of dental caries in the world (affecting ≤80% of the world's population) and highlights that almost a quarter of adults in the U.S. have untreated caries (tooth decay). It is important to note that dietary free sugars is the most prominent risk factor for dental caries, which is why the World Health Organization (WHO) has issued guidelines on the recommended intake of free sugars. As per their recommendations, people are advised to at least consume ≤10% of total energy intake as free sugars, and to reduce this percentage to <5% to protect dental health throughout life. These recommendations are based on a systematic review of the literature on sugar intake and dental caries risk, that initially found that limiting free sugars to ≤10% of energy reduced dental caries but did not eliminate them. Since caries are a lifelong, progressive disease, even low levels in children are of concern. Therefore, the systematic review then explored more studies that indicated lower incidences of dental caries in subjects consuming less than 5% of their energy intake as free sugars. Recommendations published by the WHO are generally used by policy makers as a benchmark and as a driving force for policy change. [NPID: sugar, oral health, tooth decay, WHO, free sugars, dental caries, policy change]

Added sugar and dental caries in children: a scientific update and future steps

While the process of tooth decay (dental caries) is said to be influenced by diet, Blostein et al. (2020) hypothesize that dietary patterns may be important predictors of caries. This study collected the data of 4467 people (18+ years old) in the U.S. that participated in the 2013-2014 National Health and Nutrition Examination Survey. 24-hour dietary recalls allowed the respondents’ diets to be divided into 3 dietary patterns, while their previous caries experiences were also recorded. Although the 18-30 and >30 age groups possessed similar dietary patterns, the prevalence of decayed, missing and filled teeth (DMFT) scores>0 and the median DMFT scores were higher in those older individuals (>30 years old). Furthermore, no dietary habit was associated with higher prevalence or severity of dental caries experience. Whereas the prevalence of DMFT>0 among those over 30 years old tended to rise as the intakes of sugar-sweetened beverages and sandwiches increased. In fact, there was a 6% higher incidence of dental caries experience in those individuals in the quartile with the highest level of sugar-sweetened beverage and sandwich consumption, compared to those in the lowest quartile. To summarize the results, dietary patterns were related to prevalence of dental caries experience, with varying risk depending on age. Although food groups high in sugar were linked with caries prevalence and severity, this study concluded that more prominent relationships were with the overall diet. [NPID: sugar, oral health, tooth decay, dental caries, sugar-sweetened beverages, SSB, sandwiches]

A new understanding of the relationship between sugars, dental caries and fluoride use: implications for limits on sugars consumption

This 2014 study planned to critically evaluate international studies to determine the relationship between sugar intake and the progressive development of dental caries. Sheiham & James inspected and reassessed the relevant studies analyzed by the most recent systematic review on the association between sugar levels and dental caries. Also reanalyzed were the dose-response relationships between dietary sugars and caries incidence in teeth with different levels of caries susceptibility in children. The results indicated that caries occurred in both resistant and susceptible teeth in children even when sugar intakes were reported to be 2-3% of energy intake (provided that the kids had been exposed to sugars for at least 3 years). The development of caries increased throughout life, with higher prevalence in adults than in children. Fluoride was found to influence caries progression, but the very high prevalence of dental caries worldwide is apparent. The conclusions that can be drawn from this study include the no longer acceptable recommendation of consuming ≤10 % of energy intake as sugars. Regardless of optimal fluoride intake, this study suggests the need for very low sugar intakes throughout life (perhaps 2-3% of energy intake).[NPID: sugar, oral health, tooth decay, dental caries, fluoride]

Too short to summarize. See link.

The association between beverage consumption pattern and dental problems in Iranian adolescents: a cross sectional study

The purpose of this 2020 study was to determine the relationship between patterns in unhealthy beverage intake, dental caries, and tooth erosion in adolescents. Hasheminejad et al. recruited 600 adolescents from the city of Kerman, in the southeast of Iran. The dental health of each participant was assessed based on the Decayed, Missed and Filled Teeth (DMFT) index and the Tooth Wear Index (TWI). The Beverage Frequency Questionnaire exposed tea as the most consumed beverage among these adolescents, followed by sweetened soft beverages, milk, and kefir/yogurt drink. The results also showed that the Decayed, Missed and Filled Teeth (DMFT) index in the participants who had never consumed milk was significantly different to people who obtained milk daily. The DMFT index in those who had never drank sugar-sweetened beverages was 39% (less than those who drank these beverages every day). Another statistic was that 94% of participants who had never used sweetened soft drinks had tooth erosion, which was in fact a lower proportion compared to daily soft-drink consumers. Apart from demonstrating that these Iranian adolescents had an unhealthy beverage intake pattern, milk consumption was identified as a benefit in terms of dental caries risk. Whereas soft drinks were associated with higher incidences of dental caries and tooth erosion. [NPID: sugar, oral health, tooth decay, tooth erosion, Iran, SSB, sugar-sweetened beverages]

In this 2020 study, 1,111 Scottish children were recruited and assessed on their sugar-sweetened beverage intakes and the number of dental cavities found. The overall objective was to find an association between early (during the first year of life) and subsequent consumption of sugar-sweetened drinks with caries trajectories. The children were examined annually from 12 months old to 48 months, with their parents reporting sugar-sweetened beverage (SSB) consumption. SSB intake was then divided into 2 components: the initial intake level; and the deviation from that value over time. Also, dental caries were clinically determined every year. According to the analysis models employed, the number of caries discovered grew as SSB intake and the deviation from the initial SSB intake increased. By the time the children were followed up for the fourth time, the predicted mean difference in decayed, missing, and filled tooth surfaces between kids with low and high initial sugar-sweetened beverage consumption was 1.73. In addition, the difference observed between children with low and high deviation from their initial SSB intake was 1.17. These data highlight that Scottish children tended to experience more dental caries after being introduced to sugar-sweetened drinks during the first year of their lives. Furthermore, these findings back up the current recommendations to avoid giving sugar to very young children. [NPID: sugar, oral health, tooth decay, SSB, sugar-sweetened beverages, cavities, Scotland, young children]

This study published in 2020 was designed to determine the differences in sweet taste perception in a group of preschool children (with and without caries) and to assess its relationship with frequency of sweets consumed by the kids and the presence of microbiota that cause tooth decay. Of the 63 child participants (aged between 2-6 years), 32 were with caries and 31 were without. Sweet taste perception was evaluated using a specific method that analyzed the level of taste preferences as well as the sensitivity threshold for a given taste. The children were also examined on their oral microbiota to find out which and the amount of tooth decay-causing bacteria present. The sweet perception test found that children with caries had a lower susceptibility to sucrose (>4 g/L) than children without caries who preferred a sucrose concentration of ≤ 4 g/L. Similarly, children who ate between meals had higher concentration thresholds to the sensation of sweet taste, compared with those who did not snack between meals. An elevated perception of sweet taste was strongly associated with more frequent sweet consumption in children with caries. The microbiota assessment also revealed that children with higher sucrose taste thresholds were more than 10 times more likely to grow S. mutans, a bacterium that can cause tooth decay. This study suggests the use of children’s taste preferences as a diagnostic tool for identifying increased vulnerability to caries development. [NPID: sugar, oral health, tooth decay, sweets, microbiota, sucrose, dental caries]