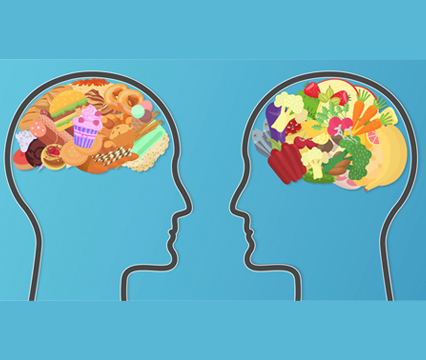 Cognitive function and consumption of fruit and vegetable polyphenols in a young population: is there a relationship?

The link between polyphenols in fruits and vegetables and cognitive function in young people was explored in this review. Carrillo et al (2019) focused particularly on memory (immediate and working) and attention (sustained and selective). The mechanism in which polyphenols exert their positive cognitive effect is discussed in this paper. Neuronal plasticity is increased in the hippocampus part of the brain and thus pathways of signaling and transcription factors (ERK/Akt) are modulated. Also, blood flow to the cerebrum is enhanced, as well as levels of nitric oxide and oxygenation in the blood.

In 317 Korean children and adolescents (average age 11.8 ± 3.3 years), the influence diet has on cognitive function was investigated. Following a series of food frequency questionnaires and neurocognitive tests [including a quick 5 minute test called symbol digit mortalities (SDMT)] the standard deviation in reaction time was found to be significantly shorter in girls than in boys, and both verbal memory and SDMT percentile results for girls were significantly higher than for boys. These positive correlations also could be made between the following foods and nutrients with cognitive tests: vitamin B1 (digital span forwards tasks and SDMT); vitamin B6 (digit span forward tests); nuts (SDMT); mushrooms (visual memory, reasoning); caffeine (reaction time) and snacks (reaction time). Lower omission errors were linked to intake of rice with mixed grains, eggs, protein, vitamins B1, B6, D, niacin and zinc. As for negative correlations, noodles were associated with lower scores in verbal memory, SDMT, shift attention and reason test results (p<0.05), Coca-cola was associated with decreased verbal memory results, fast food with lower SDMT and reasoning, and finally omission results were positively associated with eating rice and ramyeon (Korean ramen dish). Standard deviations in reaction times were positively correlated with consumption of rice, snacks, and chocolate. The findings suggest that even in children and adolescents in Korea, diet is closely related to cognitive function and proves to be an important consideration factor in the minds of parents.

Provensi et. al (2019) state that in order for the brain to undergo proper brain development and maintain optimal cognitive function during adulthood a healthy diet is crucial as well as those intestinal microbes ensuring a thriving gut-brain communication, and that cognitive deficits, anxiety and rearrangements of brain structures and functions may occur due to psychological stress experienced during adolescence. In this study, numerous tests were carried out on juvenile rats, some repeatedly administered with social instability stress, to discover the preventative effect of a prolonged diet of 4 ω-3 polyunsaturated fatty acids and vitamin A. On emotional and reference memory tests, the results were indistinguishable between the non-stressed rats and those with induced stress being fed the enriched diet. A decline in brain-derived neurotrophic factor (BDNF) expression was observed in the hippocampus of the stressed rats, as well as the normalisation of microbiota composition. Although the detrimental behavioral and neurochemical effects were still seen into adulthood, so too did the protective effect of the enriched diet continue into adulthood, long after the exposure to the stressful environment was terminated. Considering the beneficial role of nutritional components in ameliorating stress-related behaviours and associated neurochemical and microbiota changes showcased in this study, this may be a great advancement in the field of nutritional neuropsychopharmacology.

The effect of healthy dietary consumption on executive cognitive functioning in children and adolescents: a systematic review

This novel cross-sectional study aimed to use the relatively unutilised Behavioral Rating Inventory of Executive functioning-Adult version to examine executive function when analysing the associations between fruit and vegetable consumption, intake of foods rich in saturated fats, and executive functions among 240 university students. The study involved participants completing the Behavioral Rating Inventory of Executive functioning-Adult version, the 26-item eating attitude test, and the diet subscale of the Summary of Diabetes Self-care Activities Questionnaire. After demographics, eating styles and body mass index were controlled for, several statistically significant associations were identified: initiation skill was positively associated with fruit and vegetable consumption over the 7 days; while eating less foods of high fat content in a week was linked with greater inhibitory control. Executive functions that predict fruit and vegetable consumption are distinct from those that predict avoidance of foods high in saturated fat. Limbers and Young (2015) state their desire for additional research into whether continued skill enhancement in initiation and inhibition following standard behavioral interventions improve long-term maintenance of weight loss.

Diet quality and attention capacity in European adolescents: the Healthy Lifestyle in Europe by Nutrition in Adolescence (HELENA) study

Henriksson et. al (2017) explore the associations of nutrition with components of executive functioning, a set of important cognitive processes, in adolescence, beginning with this study investigating the relationship between dietary patterns and macronutrient composition with attention capacity in European adolescents. This study included 384 (165 male, 219 female) adolescents aged between 12.5 and 17.5 from 5 European countries in the Healthy Lifestyle in Europe by Nutrition in Adolescence study. Through the use of 2 non-consecutive 24hour recalls with a computer-based self-administered tool, three dietary patterns (dietary quality index, ideal diet score and Mediterranean diet score) and macronutrient/fibre intake could be determined. The d2 Test of Attention was utilised to gauge the participants’ attention capacity. In the adjusted regression analyses, it was found that higher diet quality index for adolescents and ideal diet score were associated with greater attention capacity (standardised β=0·16, P=0·002 and β=0·15, P=0·005, respectively). While Mediterranean score and macronutrient/fibre intake both could not be associated with attention capacity, the overall results suggest that healthier dietary patterns were correlated to increased attention capacity in adolescents. Following the findings of this study, intervention design studies may be warranted exploring a causal relationship between diet quality and attention.

This current study seeked to find mostly unexplored answers including whether the effects of a high-fat diet (HFD) on cognitive functions are maintained after terminating the diet, and explores the behavioral alterations caused by having a limited access to a HFD. The main objective was to compare the impacts of having a high fat diet intermittently vs continuously during adolescence on their cognition and anxiety-like behaviors, and examine any changes that occur after interruption of the HFD. The control involved adolescent male mice receiving a standard diet for 40 days, while other groups of mice were fed a HFD for the same length of time, either continuously or sporadically (available for 2 hours, three days a week. Another two groups of mice were given intermittent or continuous access to the HFD and withdrawn from the diet 15 days before the behavioral tests. Those rodents who consumed a HFD continuously exhibited significant symptoms (higher levels of circulating leptin, increased bodyweight, hyperlocomotion, marked memory and spatial learning impairments) all of which disappeared at the 15-day mark of stopping the HFD. But after discontinuation of fat, both in a binge and continuous pattern, more anxiety-like behavior was seen in the mice population. The researchers conclude from the experiment that a high-fat diet consumed during adolescence leads to alterations in brain functions, and the extent of these behavioral changes is influenced by the dietary pattern.

The effect of blueberry interventions on cognitive performance and mood: A systematic review of randomized controlled trials

The effect of blueberry interventions on cognitive performance and mood: A systematic review of randomized controlled trials

Feeding the brain - The effects of micronutrient interventions on cognitive performance among school-aged children: A systematic review of randomized controlled trials

Feeding the brain - The effects of micronutrient interventions on cognitive performance among school-aged children: A systematic review of randomized controlled trials

Breakfast and behavior in morning tasks: Facts or fads?

Breakfast and behavior in morning tasks: Facts or fads?

This 2020 article outlines the results of the Institute of Nutrition of Central America and Panama (INCAP) Longitudinal Study, which examined the relationship between nutritional status and supplementation during early childhood with concurrent and subsequent cognitive development (in childhood, adolescence or early adulthood). The study conducted by INCAP reviewed 41 articles regarding this topic and found that the children’s early nutritional status was strongly related with cognitive development in infancy and through the preschool years, continuing into adolescence/young adulthood, particularly for males. Nutritional supplementation during gestation through 2 years of age was linked with enhancements in motor development as well as small but consistent improvements in cognitive development during infancy and preschool years. Results for cognitive functioning in adolescence and young adulthood saw similar trends but of greater magnitude. These findings remained after controlling for various socioeconomic factors. DiGirolamo et al. here expose the need for assistance for the at-risk mothers and children to get proper nutrition and to potentially improve children’s cognitive development.

In this 2017 study, Korean children and adolescents were tested on their cognitive function [assessing symbol digit modalities (SDMT), verbal memory, visual memory, shift attention, reasoning, and digit span], while their diets were also examined to discover how dietary consumption may affect cognitive ability. Considering standard deviation value, the girls’ reaction times were significantly shorter than that of the boys. Overall, the standard deviations in reaction times were positively associated with the consumption of snacks, rice, and chocolate, while increases in reaction times in general correlated with higher caffeine and snack intakes. Moreover, girls performed significantly better in terms of verbal memory and symbol digit modalities tests. Higher vitamin C, B1, and potassium intake was related with greater SDMT scores, while the eating of noodles was negatively associated with verbal memory, SDMT, shift attention, and reasoning test results. Furthermore, those participants who ate more fast food were more likely to perform worse in SDMT and reasoning tests. Drinking coca-cola was linked with poorer verbal performance also. However, mushroom intake showed positive correlation with visual memory and reasoning test results, while eating more nuts was connected with better SDMT results. While these results indicated a generally better relationship between dietary intake and cognitive function among the girls compared to the boys, the findings provide evidence that diet is strongly connected to cognitive function in healthy Korean children and adolescents.